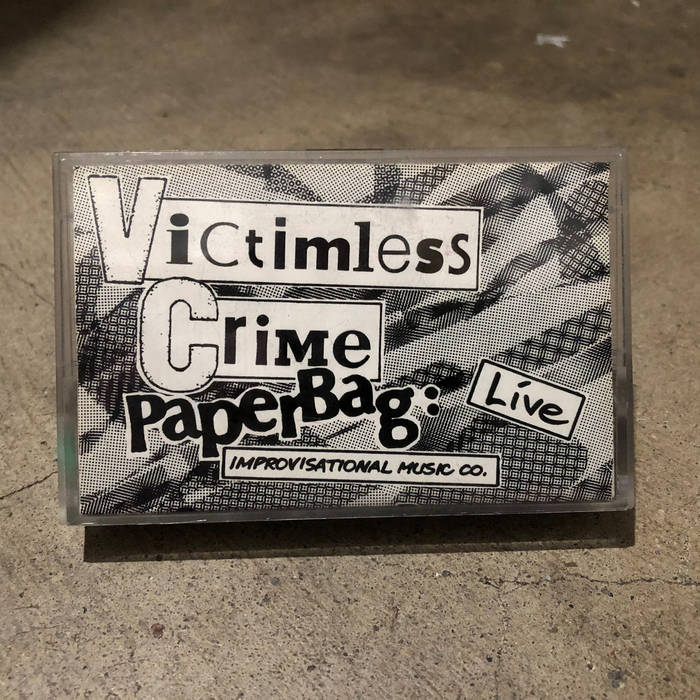 In August of 1985, George Radai joined Paper Bag. He was our first bassist since the earliest incarnation of the band, when Richard Derrick played with us. When he left, Ken Rosser joined and we became a two guitar band, with no bassist. We continued that way for a couple of years. We made some excellent music, I think. But by summer of '85, Ken wanted to move on to other things. George came almost immediately after, and he stayed. I think it was at that point the band really clicked.

These recordings, as well as the the majority of tracks from "Ticket To Trauma", came from George's first handful of rehearsals with us. Clearly he arrived prepared!

Getting the best out of these tracks was challenging but worth it! I have always loved this album. It's really a bookend with "Ticket To Trauma", but if I had to choose, this comes in ahead by a tiny bit.

On its first (and until now, only) run, "Victimless Crime" was released as an independent casssette, copies dubbed at home, with covers and labels photocopied. We placed ads in magazines that covered these kinds of things, like Option and Flipside, and quite a few others whose names I can't recall because it was 35 years ago. We sent copies to radio stations, mostly college radio, and recieved a fair amount of airplay. And we actually sold- not gave away, sold!- over 250 copies. This is a ridiculously low amount for a big release on a major label, but for something like this, it was a respectable number.

Once we were signed to SST, this album sank away into the background, something special for those who made it and those who knew about it, but no one besides. While the SST records made us tens of fans around the world, "Victimless Crime" remained unknown. Let's fix that now, shall we?

All pieces improvised live, except poetry- written beforehand, not shown to other members before performance. No overdubs.

Kenny had a 4-track reel recorder. He hooked it up to the mixing board at the tiny home rehearsal studio we called "Humphrey's", after the guy whose home and studio it was. He had some mics, so did Kenny. We did our best with what we had. One of the hazards of working this way was that there was no one watching the meters once we were rolling. Kenny ran the machine from his area, but he was also playing, so it was just a start/stop situation. Things went into the red at times. Worse, mic problems happened and went unnoticed, potentially ruining pieces. And at all times bleed was a problem. For those who aren't familiar with it, bleed is what happens when a microphone picks up sounds other than was intended. We all had problems with it, and often ended up muddying up each other's tracks. But the more mics, the more problems, and so of course the drums and percussion suffered the most.

Setups differed from rehearsal to rehearsal, mics were placed differently, This effectively meant that every rehearsal had a different sound and different problems . Also, the wide range of instrumentation, and sounds each player was capable of, added to the general confusion. So during the remix there was no way to have a single eq and pan setup for the entire album, it was a track by track job.

My goal in this remix/remaster was to get every member as audible as possible. If I had to choose between stellar tone and definition for each note, the latter was chosen. I tried for both anyway! We all worked too hard to have our performances buried.

For definition, the panning/stereo field is a bit old fashioned, with instruments pannned in their own seperate nooks, mostly left, or right, or center, as opposed to spread across the field in a more modern "big stereo" method. Considering the amount of bleed on all the tracks, this old approach doesn't end up being quite as rigid as you might expect. .