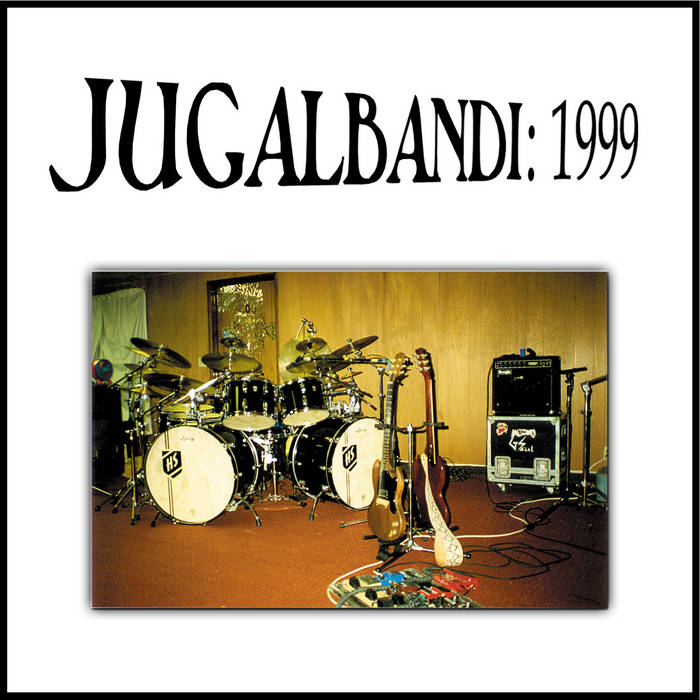 In May of 1999, Hyam packed up his drums, some mics, a mixer, his DAT recorder and a bunch of blank tapes, and drove up to Portland for a week. We booked a rehearsal studio, (for which a name was never given-we call it "the unnamed studio") and a gig at a church, the proceeds of which went to a food bank.

The studio was 3 flights upstairs over an auto garage, and we had the luck to get the main room during the year's first heat wave. The air conditioning barely worked and at times when we weren't playing, we could hear people rehearsing in the other studios. There was also a friendly guy who not only worked but lived in his little lockout space. This meant he had to walk in and out past us while we played, and he managed to make concentration extremely difficult for Greg a number of times, especially first day.

One advantage to the studio's location in a commercial area was our ability to play at any hour of the day-in fact, the first day's session didn't end until after daylight the next morning. Being able to play-through as long as we wanted gave us a sense of freedom that was essential to the creation of many good performances.

The main room's size and construction gave it a very good balance of acoustically reflective and absorptive surfaces, resulting in the most realistic recording of Hyam's drums on any of the Jugalbandi releases so far. (The entire kit-which is quite large-was picked-up using only 4 microphones.) Overall the "Jugalbandi: 1999" studio recordings reveal more of the band's musical and sonic subtleties than any of the three 'Jugalbandi 2000' discs, which were recorded at the Dog Pit (a much smaller room that had minimal acoustic treatments).

We were unable to get all the gear into Hyam's SUV, so we rented a moving van for a few days. The studio wasn't a lockout, which meant we had to load the gear in and out after each session (up and down those 3 flights of stairs), and back into the truck, where with fingers crossed we left it locked in overnight.

On the 2nd day Hyam came down with the flu, which is why there were no recordings from the 24th. Instead, he recuperated as best he could, and we got on with things the next day, nailing down a few more recordings good enough to include here.

The gig turnout was less than expected, due partially to the fact that the place was really difficult to find. Many people told Greg the next day that they'd driven past it 4 or 5 times and couldn't find it, and that they'd finally had to give up and go home. Hearing this from one person this might be an excuse, but from numerous people it's almost certainly the truth; plus there's the fact that even we had trouble finding the church when we first went to check out their stage. Nonetheless, the people who did attend were very much into it, and we gave it our best shot for them.

When we recorded "Jugalbandi: 1999", we had not played together in 6 years. In fact, Greg hadn't played much guitar in that time either, and what he had done was mostly unplugged- the effects rig had only been used a handful of times during that period. We do not think that shows at all in these recordings; we think they're very powerful musical statements. In fact, both of us feel that this was the culmination of the previous work we had done together.
-Jugalbandi, 4/03

Among the objectives for these sessions was to get some definitive recordings of pieces we'd been doing for years. I'm not sure we succeeded, because I doubt the wisdom of that goal now: how does a primarily improvisational band get a "definitive recording"? The goal doesn't match the entity. It may as well have been the quest for perfect chicken lips. That said, there are versions on these discs that, if it was someone's "get acquainted" listen with a piece- and perhaps the only version they were going to know for a long time- I would feel just fine about it. I suppose this as close to definitive as a primarily improvisational band might come. Of course in some cases we've still hedged our bets with multiple versions! It goes back to the nature of what we do: the two versions of "Uncle Sun" are 90% different from each other, for example.

There were also two new pieces. The various "Elmer Season" takes hint pretty well at the kind of things that were to develop during the Jugalbandi 2000 sessions. And "Drums Stop, Very Bad" allowed us to try something we'd always meant to do but never tried, when we lived in the same city: double drum kits. We also used this on the old Dog Neutral standard "Atomic Research In The Quiet Bunker".

In a way, it's fitting that we managed to do one set of recordings just on either side of the millenial divide. And the form they took seems fitting too: J99 is primarily older pieces (for us), and J2K was all new. A very nice symbolic gesture. And here we are screwing it all up by releasing this in 2003. Proving perhaps that good material only dies if you let it; and I admit, despite my grumblings and semi-retirements, in the long run I've never been very good at that. This stuff deserves to be heard, and for our fans and friends, I am very glad you will now have the chance.
GS, 3/03

The music on "Jugalbandi: 1999" (J99) mostly has a different genesis from the music we played on any of the "Jugalbandi 2000" (J2K) discs. Greg and I had been playing most of the music on J99 together as far back as 1988 in one form or another, while all of the music on J2K was original to the sessions we did in April of 2000.

When Greg and I decided to begin making music together as a duo in Jugalbandi, it was natural for us to use the music we were already familiar with as a framework. In fact, during the year or so Jugalbandi was together before Greg left L.A. in 1993, the only completely new piece we played that has remained in our repertoire was "Uncle Sun"; all the others were pieces we had played together in Cold Sky or Dog Neutral. So when I went up to Portland in 1999, Greg and I intended to get definitive Jugalbandi versions of this older material. Although neither of us spoke of it at the time, I think we were both anxious to take Jugalbandi in some new musical directions, and getting 'definitive' versions of the older material helped give us the freedom to do just that in the J2K sessions.
HS, 4/03

Recorded live to DAT at the Unnamed Studio, Portland OR. Engineered and Mastered by Hyam R. Sosnow.