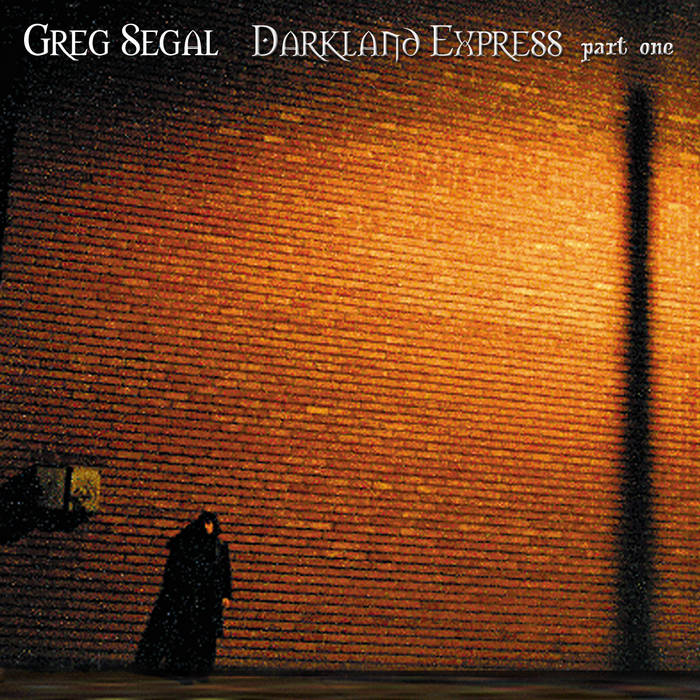 This is actually Disc One of what would have been a two disc set. Disc two can be found here:
gregsegal.bandcamp.com/album/darkland-express-part-two
The confusion will be remedied by putting them both together on one page, but for now....

"Darkland Express" is my big, snarling "fuck you" to life growing up in the latter half of the 20th century. Why so negative? Well, I suppose in the scheme of things, I did have it good. One can always refer to the "ear on the pillow" joke for the reverse of that argument* But here's the thing. We had everything we needed as a species to make the earth a good place for all of us. How about just the U.S., where I grew up? All the resources were certainly there for us to have taken a saner approach to life. Material resources, that is. Internal resources- that's where we, and on this I do again include the world, come up short. Instead of providing for people, and creating an environment where helping each other constituted "the good", we kept on fostering an adverserial, hoarding way of life, and insisting it was not just the best but the only way to go. Lip service to other methods was paid only as frequently as necessary to either garner greater public approval, or convince ourselves we were not taking the road which we were in fact hurtling down at top speed, with no brakes.

When I wrote this, whether at the beginning or end of the process, I was actively engaged both in trying to navigate my way into a settled an active role in the scheme of things, and in trying to find a way, any way, to get the hell out of something that every fiber of me disagreed with. It seemed as though success in either direction might kill me, but so would inertia. As you may guess, this produced quite a bit of anxiety. Much of that surfaces here in the lyrics. Some people may find the results heavy handed. If you do, that's your right. You should probably listen to something else then. Ditto for those who find the lyrical content lacking in mature perspective. It was written between the ages of 16 and 29. If you don't feel that an immature perspective has any place in being voiced, again, please move along. Because while I may not feel the same as I did when many of these pieces were written, a young perspective is valid as long as young people who may feel that way exist; and also, for as long as their concerns must be addressed with platitudes and double talk, as a means of getting them to get on with things, shut up and go away.

There are other things going on here as well. One of the results of such an alienated lifestyle is a lack of connection, and in many cases, a turning inward. The mind is a multifaceted dynamo of survival techniques. I think we connect with each other whether we like it or not. The mechanism which I believe may be responsible for taking us out of ourselves, and into the minds and likes of others, works best when we sleep, through dreams. These then get clothed in our personal symbols erasing many of the original details which might otherwise serve as proof of an external connection. More simply put, we dream each others' lives. This is what is referred to in the "host eyes" concept of "Shadow Books". But in fact many of the little stories on this album and on "Water From The Moon" originate in this concept. If it's not clear how this might relate back to the political side of the album, I'll tell you: we're socialist whether we like it or not. We're linked whether we like it or not. We cannot actually escape each other. In fact, I believe it goes even farther; but as I'm already pushing forward something most people would find foolish or questionable, I will leave it where it is, and hope that one day I have the guts to discuss it in depth. I'm not there yet.

If you are interested in back stories, read on. I will give details about each song, technical and personal, as we go.

Dedication for the 2016 release: This one is for everyone who thinks I "make that weird music 'cause I can't do anything else".

*The "ear on the pillow" joke: A couple have a baby with one leg shorter than the other. They tell the doctor how sad this makes them, and the doctor proceeds to assure them there are many children who have it worse. They can't imagine it. He takes them on a tour of the "casualties" section of the maternity ward. Each one is worse than the next, missing various body parts, until they get towards the end. They see a baby who is only a head on a pillow. The couple think they've seen the worst they can see, but the doctor takes them to the last bed. There is nothing on the pillow but an ear. "An ear, oh doctor, yes this is terrible, as bad as it can get!" The doctor shakes his head. "No, it's even worse than you imagine. You see, that ear is deaf."

Darkland Express is the big bad sequel to "Water From the Moon". While recording was done between 1991 and 1993, some of the material goes back all the way before I played an instrument. Old songs are mixed with new songs but none were previously recorded. I think somehow I was just waiting for the right time to bring it all together, because when I went to record, all of these seemingly disparate pieces fit perfectly.

Like Water From the Moon, many of the songs were based on dreams. Both albums share a common approach and theme: basically, the dark side of modern life, seen through dreams (and the events and internal pressures they reflect). It's about being trapped at every turn and how people deal with that. They escape through apathy and numbness; they escape through depression; they escape through madness, violence and suicide; they escape through dropping out and living at the bottom of the world- or being forced into that. Or they take vacations, play hooky from school or work. Otherwise, they go about their affairs like they're awake when actually they are in a sort of half-sleep brought about by ignorance, programming and routine. Most of the elements of their lives are unquestioned. And they pressure each other, subtly or otherwise, not to question things and start making life difficult. It becomes something like a totalitarian state: we are all expected to live that way, that is the way of the world, shut your mouth and keep going; a blindered, frightened, grinding push to nowhere. And so, though the people of the world cannot or will not see it, except in dreams or out of the corners of their eyes- the world goes about its business in darkness.

It is also, then, an album about life in the cracks between worlds, a tour of hidden realities; the interplay of the symbolic and the physical. Dream life and waking life blend and reflect each other, comment on each other, perhaps giving insight. Past and present merge. Dream cities are revisited, recurring like real places, with known streets and alleys and shops. It is possible that they are more than symbols or distortions of waking life. Like dream people , they may or may not be real: in telepathic dreams, strangers can share each other's hidden moments, even though they may be widely seperated by geography and even by time. These dreams may give a sense of deep connection; but that is washed away by the alarm clock. A haunting sense of lost contact lingers for the rest of the day, or longer.

Meanwhile, in the waking world, pressure escalates and real escape is nowhere; until, from the darkness invisible to human eyes, symbolic reality rises up to overshadow the physical- and at times, to obliterate it.

Dedication: for my family.

1. Some people manage to find work they love or can love the work they find. Good for them. We should all be so lucky.

2. Not all cops are evil rotten bastards. But the ones who inspired "The Bust" were.