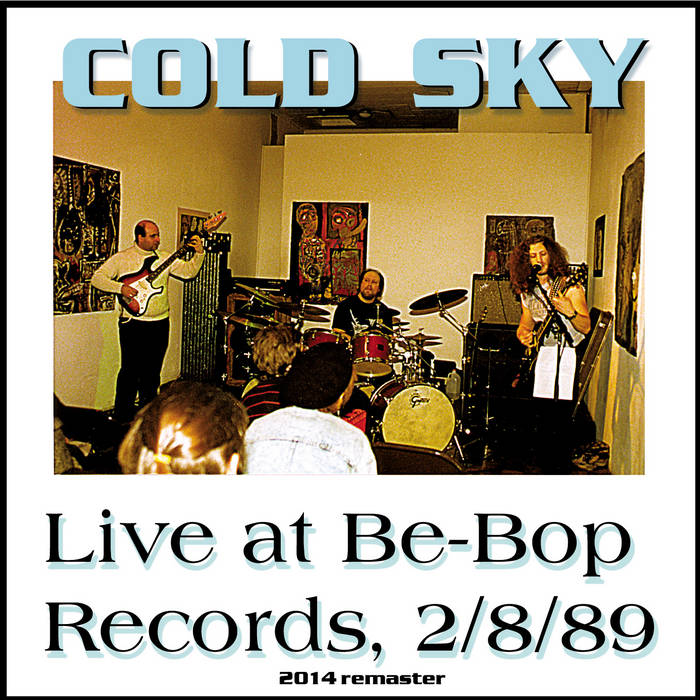 Cold Sky was a band I'd originally put together to play my solo material, but of course as these things go, it developed its own personality, and for the most part with my blessing.

You can't go out of your way to find hugely talented and unique players and then be surprised or upset when they have their own ideas. They brought great things to my material and contributed to original material.

The band had two phases, one as a three piece and one as a quartet, with a keyboardist.

The hugely talented rhythm section previously referred to were George Radai, bass, and Hyam Sosnow, drums. George was Paper Bag's bassist, and so a natural fit for Cold Sky. Hyam Sosnow spent the '70s making his living touring around the country.

This was the trio's first show in front of people (our only previous show for an audience being a live radio set on KXLU in November '88). This night broke records for low temperatures in the area; outside the venue it was 28 degrees F. While this would not have been a problem in a city used to cold winters, in L.A. this drastically limited the turnout, despite being among the picks of the week in the L.A. Weekly. The audience was made up of die-hard supporters, mostly family and friends: M. Segal, Tom Shannon, Dave Mcintire, Steve Shaw, girlfriends/family/spouses, etc. They managed to sound like a fair amount of people!

While staying true to a "warts and all" approach, this is a very good representation of the trio lineup, with some great performances. It not only has very different versions of the solo tracks listed, but also includes an early pre-Jugalbandi, full band version of "Under The Bridge; and "Blacklight Towers", which is not available in any version anywhere else.

The sound quality is like a front row or very complete soundboard bootleg, with true stereo separation. The stereo image is just like the picture on the cover! There were technical problems throughout the evening, which are as accurately represented as the music: equipment sputters and crackles; the PA gives the vocals a boxy, slightly distorted sound, and it cuts out twice, briefly. But that's what you would have heard if you were in the room!

This 2014 remaster brings just a few changes, mostly level corrections that bring up a few of the more quiet sections, and bring George up during "Under The Bridge" and his solo in "Clear Day".