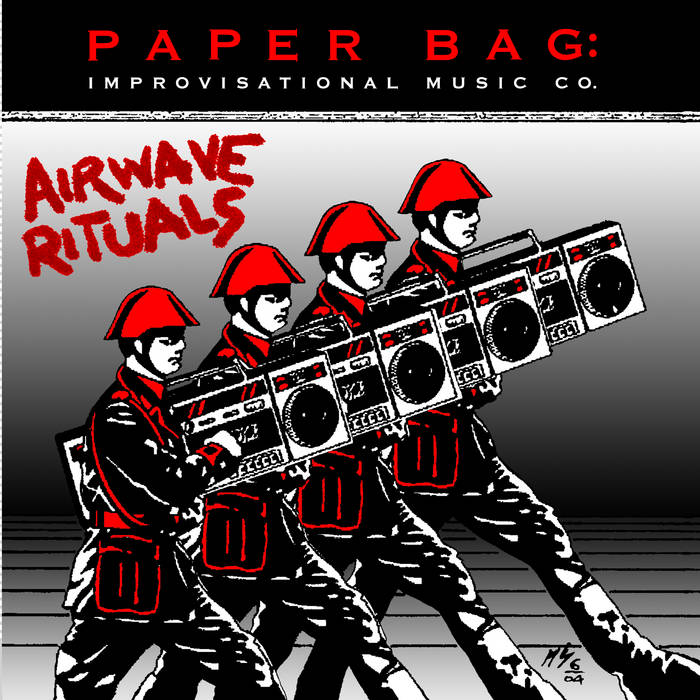 (Here are the original liners for "Airwave Rituals", assembled by George and Kenny from notes written by all of us, and suffering from a slight edit by me on this, the site of its second coming.)

What is "Airwave Rituals"?  Back in the summer of 1986, Paper Bag: was getting  a lot of  interest and visibility from our self - released, advertised, promoted and produced cassette "Victimless Crime".  Great interest was brewing in anticipation of our upcoming first vinyl release "Ticket to Trauma".  We had many positive reviews, and a great amount of radio airplay and buzz about the band.  While we were doing many regular gigs in and around Los Angeles, for various reasons we were unable to go on tour to promote these releases.

Determined to overcome this, we then developed the idea of doing a "by proxy" radio tour.  We would go into a studio and record live sets of unique improvised music just as if we were actually present playing live at the radio studios, and we'd do these recordings specifically and ONLY for those radio stations that were interested in us or had requested a 'personalized' set.  No one had ever heard of such a thing, and the stations loved the idea--ultimately 26 separate 45min sets were recorded and sent out. We decided to assemble a "best of" collection from the first 6 radio sets.  We roughly mastered the material and were close to releasing it to the general public, when SST Records signed Paper Bag: and released "Ticket to Trauma" on vinyl. Much success followed, with the unfortunate side effect that "Airwave Rituals" became overshadowed, and until now has been relegated to the shelf.

It was never our intention to wait 20 years to release these recordings.  We still feel this collection is among the best music Paper Bag: ever made, so we are very pleased to have finally made this material available, now digitally mastered on CD.

You must first indulge the memory of the atmosphere in which we birthed so much of Paper Bag:’s finest moments, represented here on ‘Airwave Rituals’.

Humphrey’s Low Budget Studio was in the San Fernando Valley of Southern California. The temperature was always extreme. In the summer an anemic air conditioner and 2 box fans blew around the damp heat. In the winter we played with our jackets on until warmed up, as we could not use an electric heater because it always blew a fuse. If it rained, the severity was gauged by how many pots and buckets were necessary. The room was a half-assed garage re-do, obviously given up on when the money ran out. The front double doors had to be squeezed open and closed. The floor and walls were covered in shag remnants of rug lifted from the garbage bins of the local Carpeteria. The ceiling was a slightly drunken pattern of water stained acoustic panels that sagged at the corners. There were 2 reasonably good PA speakers, a worn gaggle of microphones, sticky but functional cords and numerous stands complete with duct tape accoutrements. The back 20% of the room had been isolated as a sort of intended recording studio, door, double window and all. In this tiny area the PA head and mixing board resided, leaving room on the work bench for a simple 4 track recording device. Wires, old instruments, rain catchers and an amalgam of just plain crap lined all available wall space.

When we played, all of the above did not matter a whit. Carol Alleca sat in the squalid booth, working her magic, almost blissfully unaware of the limitations of equipment and environment.

We took chances, constantly experimented, serious with intent, sometimes blinded by the hazy light of worlds without boundaries. We were the anti-Christs of the record companies, oddities of the local alleged punk scene. We fit no one's labels, resembled no band we were ever put on bill with. We knew it, relished it.

Engineered and mastered by George Radai, assisted by Kenny Ryman, 11/03-7/04